Back from the LSM

This week I was at LSM aka RMLL.

I held the Fedora booth there, alone, for the whole 5 days.

The event was really nice, I met a lot of people and tried to do my best promoting Fedora (which must not be a lot). My only regret is that... well, being alone on a booth for a week is really tiring ^^'

Thomas, Patrice and Max joined me on Friday. Max gave a talk on the Fedora Foundations. Apparently, it was filmed, so I'll try to get a hand on the video. Thomas was interviewed by the event radio, and the recording is available online (in french).

Logistic was kind of shaky. We had a really hard time accessing the Internet, both at the event and at the dorm. The event also moved on Saturday, as the university that hosted us the 4 previous days was closed. However, we were welcomed by an elephant on the Saturday place: 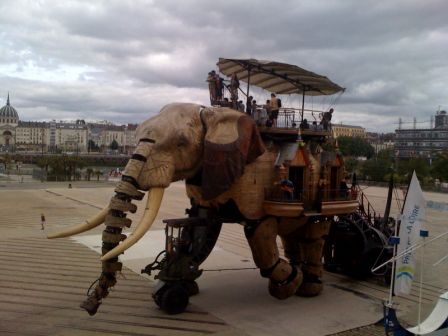 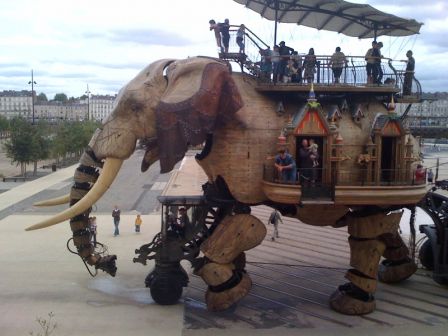 All in all, I had a great time, even if I would have loved to go to more than 3 conferences. I had to let the booth unattended to go to those 3, but the Ubuntu-Fr and Mandriva-Fr booth people were really helpful, especially Marianne who made some delicious cookies (I managed to let some for the visitors :-D) and Michael, who even promoted Fedora while I was away :-D.

On the Shomyu side, the event was also quit... surprising. I finally met Sonny from the Mozilla community who had contacted me earlier about it. I also got in touch with Julien from SliTaz who expressed his interest in using Shomyu for their community. The aforementioned Mandriva Michaël told me the same, and even invited me to the soon to happen AFPyro (an « apéro » organized by the french Python association), and asked me if I would be interested in presenting Shomyu at the next PyCon

I also talked about it with some Ubuntu-Fr guys. It seems they are trying to build such a tool themselves (but with GoogleMaps instead of OpenLayers / OpenStreetMap, and I sincerely hope we can share some code or even merge the two projects.

I can't believe what's happening with what started as a rant on the french Fedora mailing-list. Lot's of people seem to have heard of it and are willing to use it. I sincerely hope that at least some will give me a hand, as it will not be ready any time soon if I have to go on alone.*hint hint*