EDIT Sun April 29 2012: It seems I failed at typing the article properly and the end was missing... Just fixed it.

A few days ago I received my new Cybook Odyssey, so I thought I'd share my impressions.

First of all, I've always been a bit worried about these devices, given the precedents set by other vendors: DRM, lock-in, remote access to your device,...

Reviews like Mairin's were making me anxious, and it took me a very long time to decide on buying an ebook reader.

What convinced me to go for the Cybook Odyssey was the following (in no particular order):

Note: This article is from Nounours, a good friend of mine. He doesn't have his own blog (yet?), so I'm letting him use mine.

For quite some time now, I had this beautiful Tshirt to promote my favorite FOSS project in the whole world, Fedora: 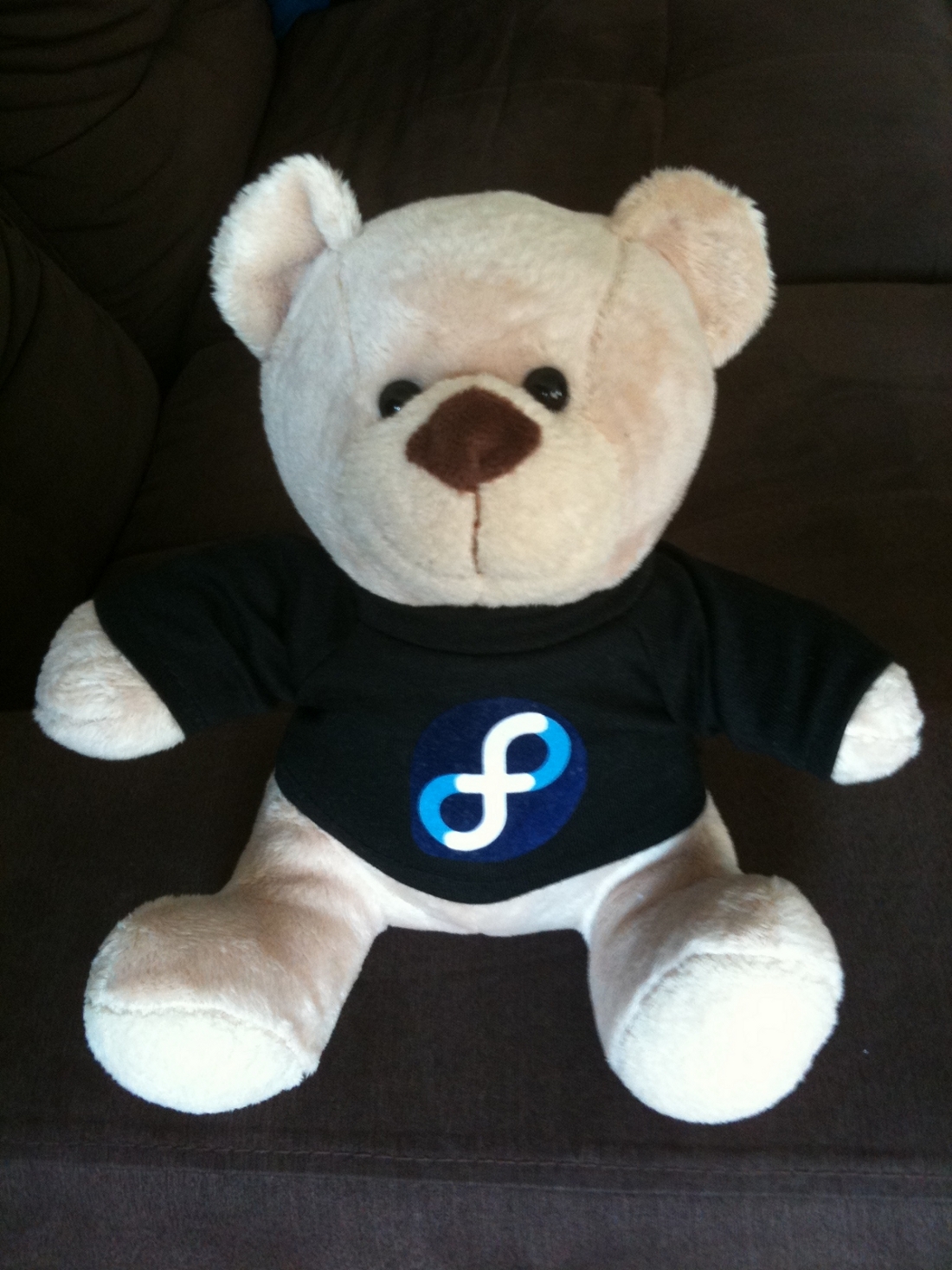 Well, thanks to Mathieu's awesome girlfriend, I now have this gorgeous tshirt to promote my second favorite project: 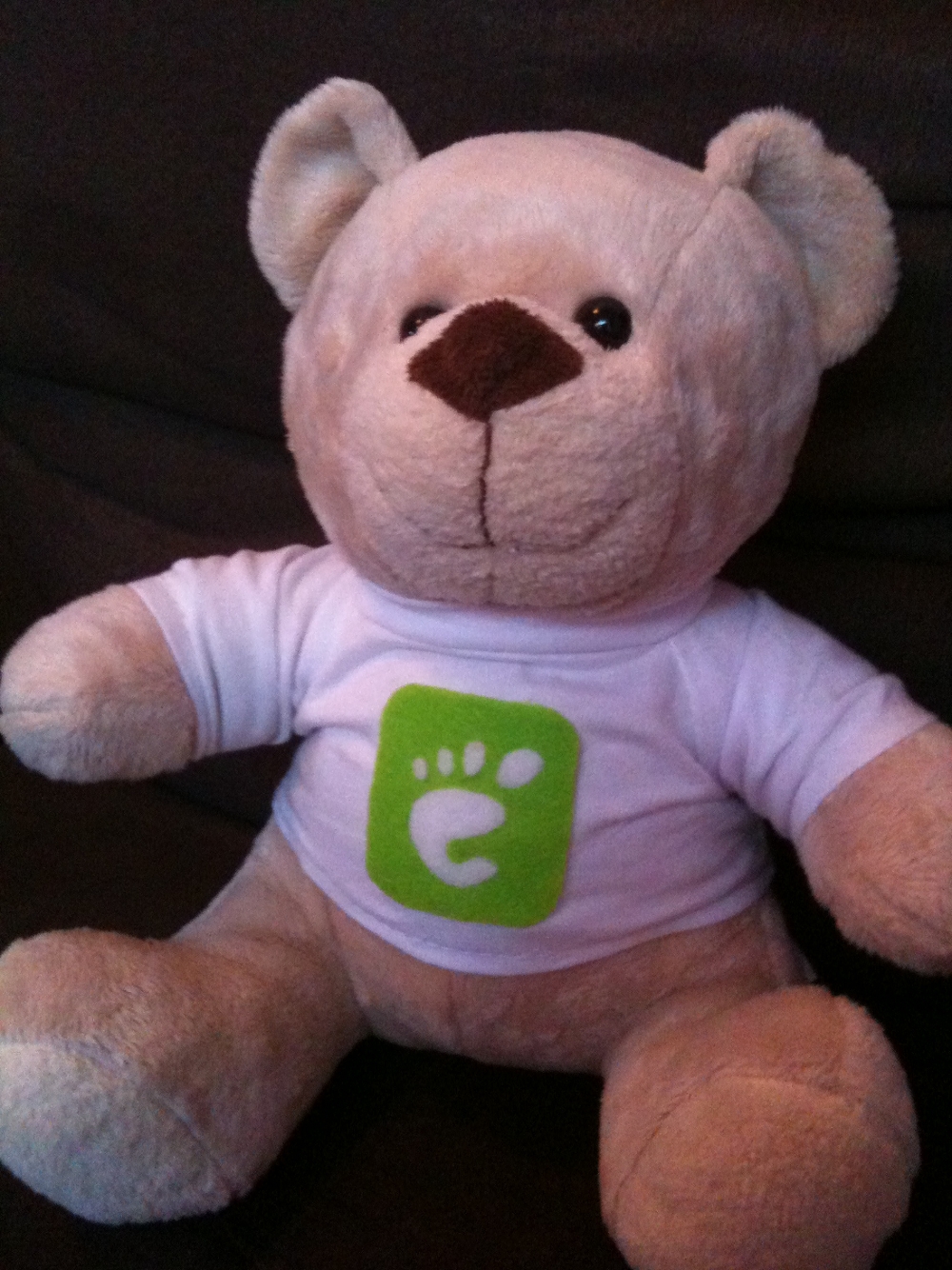 Now I'm all set for the FOSS events in Hong-Kong!

Thanks for the post Nounours, feel free to use my blog again any time you want.

A smarter way of importing a new package in Fedora?

tl;dr: This post proposes a new way of importing a new package in the Fedora dist-git tree which allows to also import the whole back and forth changes made during the review request.

The recommended way to import a new package in Fedora is to do the following:

However, all the comment/fix process as part of the review is only available in one place: Bugzilla. The package effectively starts its life in Fedora at the moment the srpm is imported.

Wouldn't it be nice to also keep all the history from the review process as part of the Git history of the module? Fortunately that's possible thanks to Git.

Here comes the trick. Once you will be working with the Fedora Git, there will be a master branch (for Rawhide). To avoid any future pain, let's rename the current branch as tmpmaster:

You can now start working on your new package as you would normally do:

Note that you must not commit the source archive, since it will be added to the lookaside cache later on.

Hopefully, at some point, the package will be approved and the Fedora Git module created. Instead of starting at step 6 above, let's do something a bit smarter.

Then apply your work to the Fedora "master" branch:

Finally, switch to the master branch and fast-forward it to the state of the tmpmaster branch:

Check that everything is fine with your favorite Git visualization tool, and when you're ready, just remove the tmpmaster branch:

At this point, everything will look like you had been working inside the Fedora Git tree since the beginning, as if it had been creating before the review. You get to keep in one place the history of your package, including the history of its life before entering Fedora.

Finally just upload your sources with fedpkg, build your package on Koji, and more generally just go on working on your package as you would normally do after a fedpkg clone (that was step 7 above).

What would really be awesome is if fedpkg could grow the capability to add new remotes and do this trick by itself. Hmmm, I wonder...

To the conquest of the East

I talked about my moving earlier, and since a few hours, I'm finally in Hong-Kong.

If there are some Fedoristas over here, and if you want to meet around a table (with drinks on it, of course ;)), just leave a comment or drop me an email.

- Yeah, that's nice and all, but what's PyF anyway?

Right, I should have probably started with that. PyF is a pure Python framework for writing highly scalable data processing applications. PyF is Free software, distributed under the terms of the MIT license.

- Scalable, you say? How scalable exactly?

Well, PyF is based on flow programming. That means that instead of processing « a certain quantity of data », we process a « flow » of data, so that at any point, we only ever have one object in memory, no matter how much data we will process in total. That's right, mining your huge customer database and generating reports with PyF will not take your servers down to their knees.

For the Python devs in here, we use Python generators everywhere. You can see it this way: each unit of the whole processing chain takes a generator as input and yields values as soon as they were processed. We could even handle a never ending flow of input data and keep processing them, yielding each one after the other!

It depends on what you want to do. PyF is composed of several layers. At the low level, you have only the basic subset of core functions that will help you write flow-based applications.

At the highest level though, you will find a full-blown web application that allows you to graphically design your processing chain (we call it a tube) by dragging and dropping processing units (we call them components) and chaining them, output to input. We have several default generic components that can be used to do all sorts of processing and reporting already, and it is pretty easy to write your own if necessary (we will gladly help in any case). We even have a built-in scheduler so you can specify when to automatically launch your processes!

We wrote a simple tutorial to get PyF, and a series of tutorials to actually make your first steps.

- OK, you got me hooked up. Where can I find more informations?

The project home page is at http://pyfproject.org

We already have some documentation which should be more than enough to get you started, although we are working on making it more comprehensive.

If you have any question, come hang out on our mailing-list or our IRC channel:

PyF is still a very young project, but we have been dogfooding it at work from day 1. We are very friendly and welcoming, so don't be afraid and join us, report bugs, submit patches, or simply use it.

On a more personal note, PyF has been the first big FOSS project I have worked on during $dayjob. I'm about to change job and life pretty soon, but don't worry, it's carried by some dedicated and much more talented people (two of them being core contributors to TurboGears). I will try to stay close to it since I grew quite attached to the project, and given how useful it can be I will no doubt be needing it for a future job anyway.

Change I can't believe in

A few days ago, I received a confirmation from the Hong Kong Department of Immigration: my request for a working visa has been accepted. \o/

This means that starting January 17th 2011, I will be working and living in Hong Kong.

I still don't realize what has happened to me. For those wondering, I do have an awesome and FOSS-related job waiting for me over there, but more on that later.

Consider this blog post my introduction to the Chinese community. I'm Mathieu (aka bochecha), Fedora ambassador, ambassador mentor and package maintainer from France (at least until next month :D). I have also been serving on the board of the Fedora-Fr NPO for the last 2 years.

I hope I can be of use to the Fedora Chinese community once I get there.

(And no, I won't dare posting a Chinese version since I can't speak, read or write it yet. :P)

I should probably have blogged this earlier, but:

I'm already in Zurich by the way, and I'll be meeting with Shaiton tonight. Drop me a line if you want to go have a drink.

Some concepts made me think about Gnome-Shell. Being a huge fan of the latter, I wanted to give a try to Unity, and so I started to package it for Fedora 13.

Didier Roche, one of the Canonical desktop team developers, gave me some hints about this. Unity is composed of several packages, mainly:

However, I'll probably have to build most of the packages in the Unity PPA, as well as some needed libraries that might not be included in Fedora yet.

Figuring out in which order to build those took some trial and error, and the first bad news came when trying to build wncksync: it requires a patched GLib. Then came the happy time of DSO linking failures for both wncksync and liblauncher.

Because of the GLib patch, I'll probably not be able to push those packages to the Fedora repositories, so I'll be uploading them into a (hopefully temporary) Fedorapeople repository.

A lot is still missing, but I have the first 3 components: GLib, wncksync and liblauncher (only available as source and x86_64 RPMs, i386 will follow).

No repository configuration yet, as there's nothing ot test anyway. I'll post more updates as I get to build other packages.

Feedback is welcome on the quality of the packages though, so that any future review is made easier.